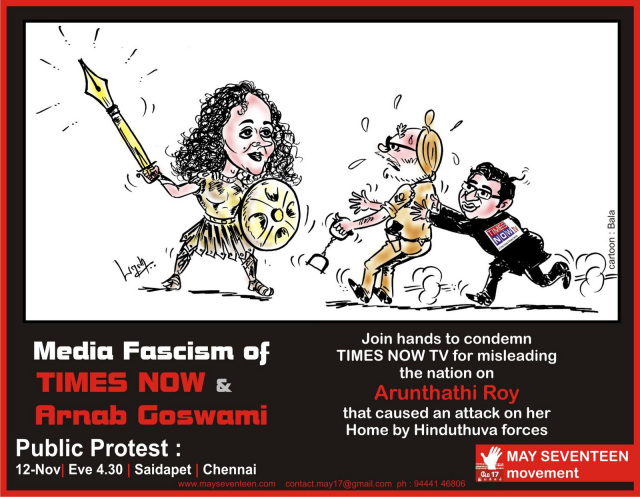 A section of the corporate media systematically and sincerely is working towards demonizing the people who fights for their basic rights and freedom and their supporters, activists. In the world of Public Relation driven politics, media plays a very crucial role in supporting state’s efforts to silence the dissent voices and in most cases the media is acting as front line warriors.
Tamils had enough experience on the PR war on their freedom struggle. A similar media campaign against tamil eelam struggle of Srilanka cost not only 140,000 innocent tamil lives but  portrayed the tigers of tamil eelam as terrorists, which was later criticized by the Permanent people’s tribunal held in Ireland. But by the time world realizes the need for such a demand, thousands of innocent lives was lost and now the world is ready to slip into selective amnesia on the genocide perpetrated on tamils. Tamils like any other resistance ethnic community has suffered enough by the media fascism lead by The Hindu and its Editor N.Ram. And the entire media is now silent when genocide is silently on the making in the post war eelam by the singala occupying forces.
Similarly the English news television channels were critical of Arudhathi Roys’ views on Chattisgarh, Jhargand. The efforts to portray the struggle of the innocent people in central part of India and Maoists as a Terror Act were challenged by the Arundhati Roys’s statements. Unable to face the truth the state and the media was waiting patiently to corner the demonize Ms.Arundhati Roy and so they were quick to react while she was questioning the Occupation of Kashmir by Indian state. Media especially Times Now Tv argued to the nation that she should be arrested or punished under seditious charges in different sections. The media took the law in their hands and whip everyone they want to sideline from the society.   This is nothing but an act of Goonda. The BJP and the hinduthuva forces using this uproar unleashed violence on Arundhati Roy, clearly indicates that fascist forces are joining hands when people facing their hardest time in the history of post –British era.

We are seeing an Imperialist design in these sections and they want to terrorize the democratic forces.  The corporate-media-state nexus will keep strengthening their cooperation to loot the people in terms of money, morals, culture and land etc. And this situation brings us together to fight these fascist forces. Let’s join hands to show our solidarity to Arundhati Roy and condemn the attack by the media and hinduthuva forces.