When I was in the fifth standard, my sister and I went to school with a black flag pinned on our school uniforms. My school teacher stopped us at the gate and questioned: “Why we have black flags pinned on our shirts?” I replied “Sir, many Tamils were killed during the bombings in Srilanka. My parents pinned the flag to show our protest against the killing. “Yes, yes” nodded my younger sister.” “What is for you if they are killed in Srilanka?” asked my teacher. My sister looked at me for my answer. I didn’t have an answer. I was shaken by my teachers’ menacing words. But, the question remained in my mind and I get to know the answer from my father when I reached home. And, my emotional bonding towards Eezham Tamils began when I was ten years old, comrade.” reveals Thirumurgan Gandhi on his metamorphosis into an activist. We spoke to Thirumurugan Gandhi who was released by a court order after being jailed for four months under Goondas Act.

“You have been protesting continuously. When did your first protest begin?”

I began when I was in 12th standard. I protested against the change in our school curriculum outside school premises by mobilizing friends while still in school uniform. When I was in college, I fought against the college management which tried to cover up the suicide of a girl student. It was during my college days, Rajiv Gandhi was assassinated and the circumstances were not conducive for us to discuss Eezham politics openly. The situation was such that we used to discuss it metaphorically through poems. Whenever I get an opportunity I travel to different places to read poems. Later, the strike conducted at Madurai University gave a huge experience. That was an opportunity to learn on how to lead a protest.

When did you decide to change as a movement?

I’m a software engineer. I passed out as the best student with all laurels from my college management. My college mates who did software engineering with me were leaving for US one by one. I decided not to go to the US under any circumstance and therefore, I didn’t apply for the passport. I was not sure of what to do and, with no money, many times I have come to this same Natesan park where you are interviewing me now only to lie down curled up. Talks with my father and mother decreased. Then, the twin tower attack happened and nobody was allowed to enter the US. I used that reason.

With a capital of fifty thousand, I started an IT startup and it expanded. I had fifteen employees working for me. I had an income of two lacs per month for myself. I got married. I had a steady income. Unexpectedly, my mother passed away. My daughter was eleven months old. The Eezham genocide was at its peak, I suspended my work to take part in the Human chain protest conducted by Karunanidhi, fasting protest conducted by Thirumavalavan, students protest in Chengalput, etc. One day, I heard the news of Muthukumar’s death by self-immolation and I reached the place. I got to read the letter written by Muthukumar which brought a big change in me. He didn’t immolate by impulse. He placed a political demand. The feelings towards Eezham Tamils that existed in me grew manifold at that point. That is when I decided not to continue the same life and all the like-minded youngsters came together to function as a movement. We led the protest against Kudankulam project. We exposed the effects of Methane project. We intensely protested against the death penalty of three Tamils. Mullaiperiyar demonstration, Environmental concerns, Tamils rights, Tamil issues, misrepresentation by National English media and the struggle continues till today.

Wouldn’t Tamil Nationalism isolate the people speaking other languages who live in Tamil Nadu? To what extent can they fit themselves in it?

Nationalism includes all sections who are being affected. Since the majority are Tamils they are in the forefront. Otherwise, we struggle for the rights of everyone. The input for Tamil Nationalism is the bottom section people’s political freedom, cultural freedom and economic freedom. We believe the minority ethnic nationals present here will accept the freedom proposed by Tamil Nationalism.

How do you see the Tamil Nationalism which says ” Going forward, only Tamils should hold power and rule Tamil Nadu”?

Whoever marches us towards our freedom, can hold the lead. Language is not a problem for us. Didn’t leader Lenin struggle for freedom of the people from Kyrgyzstan, Kazakhstan, Uzbekistan, Georgia? Didn’t Stalin, who came from Georgia, led the freedom struggle for Russia? Wasn’t that possible! Lenin demanded the freedom of ethnic nationals. Stalin defined it. They went beyond language and were known to have spoken of justice for all people.

Whoever struggles for the ideology of Tamil Nationalism is our comrade. There were people from the society who spoke other languages self-immolated during the Eezham war. What united them with us? Humanity is the point where they came together. Can we deny that? Till now, Tamil Nationalism has not proposed the purity argument of only Tamils should rule. Perunchithiranar, Tamilarasan, Poet Kaliyaperumal and the leaders who followed them never put forward such an ideology. Any talk of alienating the people who speak other language and denying power to them as Tamil Nationalism, will not make any difference between Sinhalese government and us. The ideology of Tamil Nationalism is not to have linguistic discrimination but to bring working section people together.

What is the primary objective of May 17 movement?

We have two goals which are inseparable. Tamil Nationalism and annihilation of caste. The true strength comes out only when these two unite. Liberation Tigers of Tamil Eelam(LTTE) eradicated caste before they became a stronger unit. That was the reason behind the movement which was able to fight against its enemy till the end. There were commanders from the oppressed community who had soldiers under him who fought the enemy. They implemented severe punishments for caste atrocities committed in the territory administered by them. Let me make one thing clear. Tamil Nationalism is impossible without eradicating caste. We don’t have a history which speaks of casteism embracing Tamil Nationalism. They like to construct it for the sake of electoral politics. I don’t see them as Tamil Nationalists. There will be many attempts to distort the true ideology. Misguidance will happen and this is one among the many attempts.

What do you think is the fundamental change required to widespread Tamil Nationalism?

Caste. It keeps the people divided. The village and cheri (Dalit streets) have to be united to fight the enemy. Those who land here to plunder our wealth doesn’t like us getting united. Those who claim to belong to warrior community could have fought against the Gail pipeline laid in their villages? If we unite as Tamils, without caste discrimination, we can easily win over these livelihood affecting destructive projects. The politicians here don’t like people being united leaving behind caste. Electoral politics nurtures caste. The caste can only be destroyed when you go beyond electoral politics and move towards the politics of freedom. We would like to talk to those who perpetrate caste atrocities against Dalits to eradicate the atrocities. Along with Dalits, other communities to consist of working section people but caste works to keep them separated. If these two sections come together, various issues in Tamil Nadu will be resolved. Dalits do not identify their caste as their pride. It is to claim their rights and freedom. We need to understand this.

What could be the background of the Goondas Act that pounced on you?

There are not many backgrounds in it, comrade. The impulse to protest grew among Tamil people. We used to tell the public about such clampdowns to come in future as a precaution. Now, they have been affected directly and hence they came down to streets. Moreover, we were arrested to create a fear among the public and warn them that this will happen to you tomorrow if you come out to protest. But, today it has backfired. On Saturday’s public meeting more than three thousand people rose their hand willing to be arrested under Goondas Act. What is the government going to do?

Lot of protests, jail…how does your family see this?

My father will remain confident. Though my wife was not afraid she didn’t expect me to be arrested under Goondas Act. She expected that I will be home in two or three days. My daughter yearned for me without seeing for many days. She had been calmed by telling her that I had gone out of the station. She started crying after she met me in jail. It was just four months for me but there are leaders who had been in jail for many years. So, I don’t want to romanticize this further comrade.

“What are your next steps?”

“Our next steps are to visit all districts to meet youngsters and bring them together. We are going to prove ourselves as a strong political movement without electoral politics. We are sure that people will provide the strength by standing with us.” confidently smiles Thirumurugan Gandhi. 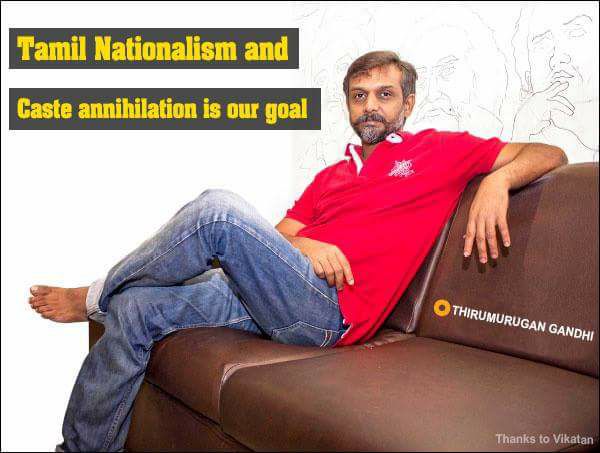