BJP government, don’t try to implement the new national education policy (NEP) despite the opposition of Tamil Nadu! Drop that effort right away! – May Seventeen Movement 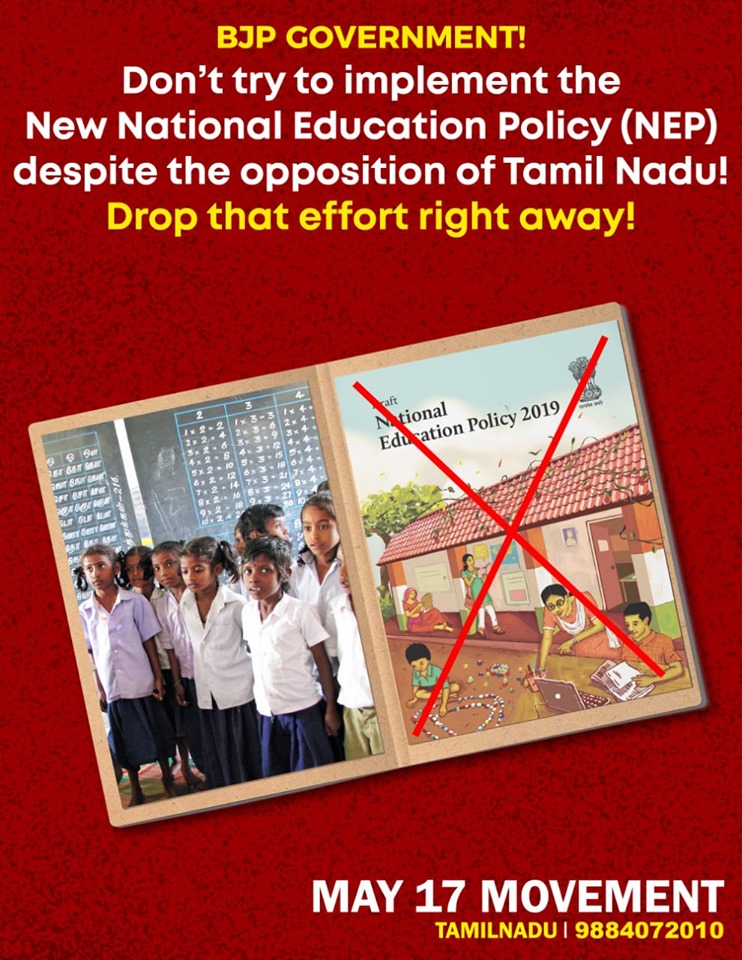 It is reported that the BJP government is going to implement the new education policy in the second week of November, which is facing severe opposition across Tamil Nadu. Millions of letters have been sent to the Ministry of National Human Resources Development, urging for the complete withdrawal of the NEP.

The BJP government is now trying to finalize the draft of the NEP by making only a few minor corrections to the old draft which is completely waste. It has been reported in the media that a cabinet meeting will be held to confirm the final report.

Many states including Tamil Nadu have been voicing in their claim that the right to education belongs to the states. But the Union Government of India is going to snatch the education authority from the concurrent to central list. This is the biggest issue of the NEP.

The Union Government of India is trying to impose Indian-level entrance exams in all areas of Arts, Science, Law, Engineering and Medicine. While the Tamil Nadu people are still struggling against the Medical NEET exams, silently the admission to all courses through entrance exams will be introduced through this education policy.

With the introduction of multinational corporate investments in education, education is going to become a costly commodity which is out of reach for the poor. Making only few minor corrections for the namesake without making any changes in the above said features. The union government is about to finalize the new national education policy by falsely claiming that it has been corrected by public opinion. The Government of India has already begun to implement the new educational policy under various names.

Various states have opposed the creation of the RSA, the central education authority, which takes away education from the state government and facilitates the central government. The BJP government is reported to have said it would change it, but only shifted its chief responsibility from the Prime Minister to the Minister of National Human Resources Development.