To begin with, let us date back to an incident that took place about 20 years ago (December 24, 1999) when the Indian Airlines flight (IC814) heading towards New Delhi from Kathmandu (Nepal) was hijacked by a group of terrorists. At the injunction of the terrorists, the flight was made to land at 3 different cities starting with Amritsar, Dubai and eventually landing at Taliban controlled, Kandahar located in Afghanistan. Many of us may not be aware of a situation that existed back then for a possible rescue operation by the Indian Army when the flight was landed at Amritsar, but then, the BJP government that was in power during that time was not prepared to perform the rescue operation due to the presence of one individual, *India’s Key Research & Analysis Wing (R&AW) Officer, Shashi Bhushan Singh*.

Eventually, the Indian government conceding to the terrorist’s demands, released three high profile terrorists from its prisons in exchange for the passengers and the R&AW officer’s life. All the negotiations with the terrorists were managed by India’s then *National Security Advisor, Ajit Doval*.

As you may be aware now, three of the released terrorists later formed a terrorist outfit, *Jaish-e-Mohammed* which claimed responsibility for some of the worst terrorist attacks on the Indian soil right from the Indian Parliament attacks in 2001 up until the recent Pulwama attacks at Kashmir culminating in the death of 40 CRPF soldiers.

Despite being accountable for such a devastating security decision, Ajit Doval was once again appointed as the National Security Advisor by the current BJP government in 2014. The billion-dollar question of BJP government re-appointing Ajit Doval as the NSA, despite his miserable failure shall be answered if we are able to track the identity of the *‘50-year-old VIP’* who was present in the same hijacked flight IC814 whose safety was coercively prioritized for India by the Switzerland and Italy government officials during the course of that hijack.

Foreign Governments were keen on one individual’s safety and had insisted the Indian government to heed to the terrorists demands, whatsoever it may take. The foreign governments had citied that the VIP was *Robert Giori, the CEO of De La Rue PLC* which was responsible for printing around 90% of all the world’s currencies and without him, there might be chances of a global cash meltdown (http://bit.do/ePoVj).

The then external affairs minister of Switzerland, Joseph Tesi was in constant touch over the phone with the then external affairs minister of India, Jaswanth Singh and exerted immense pressure on the Indian government to amicably give in to the terrorist’s demands. The Swiss government had even flown a team under General Hans to assist and oversee India’s handling of the situation. Amidst the high drama, the Indian government had paid a heavy ransom to the terrorists to save Robert Giori and flew him back to Switzerland under direct command of General Hans’s team.

Robert Giori was the foremost kingpin of the World’s Currency industry. He was nicknamed the ‘Currency King’ by the World’s Top Financial Companies as his company ‘De La Rue’ had not only printed 90% of all the international currencies but also was the top player in manufacturing currency printing machines, currency printing inks, training and mentoring majority of the printers who excelled in currency printing. In short, Giori had established a profound dynasty that owned the World’s currency printing business in its entirety. He was also one of the obscenely rich individual who perpetually helped his peers in stashing their black money in tax havens and later launder it as well.

He was also notorious in printing and distribution of counterfeit currencies to various terrorist outfits across the world and inflicted artificial economic crunch thereby devastating the sovereignty of nations.

It might come as a shock that Giori’s company, *De La Rue was indeed printing India’s currencies as well for over 100 years*. The top 4 companies that officially print Indian currencies for our Reserve Bank of India are 1) UK based De La Rue, 2) Australia based Innovia, 3) Munich based Giesecke & Devrient and 4) Swiss based Landquart.

The biggest player among the lot, De La Rue was banned from printing Indian currencies by the Indian government in 2011. The ban resulted from CBI raids which unearthed crores of counterfeit Indian currencies (Denomination of 500 & 1000) across 70 bank branches in Indian & Nepal. Similarly, counterfeit currencies were confiscated from terrorists in the Indian – Pakistan border as well. Source of the counterfeit currencies was successfully traced back to India’s very own Reserve Bank of India which when questioned by the CBI authorities revealed that RBI had outsourced the printing of 500’s and 1000’s to foreign companies like De La Rue via indirect agreements and the printed currency notes were then exported to India for circulation by the RBI.

Journalists questioned India’s economic sovereignty which was followed by a Joint Parliamentary Committee that heard the relevant explanation from the Reserve Bank. It was revealed that about 500,000 notes worth over Rs 1 Lakh Crore were printed by foreign companies per the deal, the majority of which was contracted to the De La Rue company. These companies have also been found to sell currency printing technology of India and various other countries to some of the terrorist outfits. The UK government’s Serious Fraud Office exposed various allegations, such as the sale of bad quality papers for printing currencies. All of this led to the ban of the De La Rue Company in India in 2011.

Following the ban of De La Rue, about 2000 metric tons of paper that had been stocked in their warehouses for printing cash had piled up. This caused a huge loss to the company. It also suffered a sharp decline in the stock market as India’s currency printing contract was terminated with De La Rue. The then CEO of the De La Rue Company, James Hussey was held accountable for the company’s downfall and had stepped down as the CEO.

The De La Rue Company which had become hugely infamous for having involved in serious frauds had taken a new form in the disguise of *KBA GIORI* company with Switzerland’s support. In the recent few years, De La Rue company in its new form as KBA GIORI had attempted to compensate its losses incurred in the past by tipping commissions to a wide range of agencies across New Delhi in order to secure Reserve Bank India’s contract once again.

*Modi’s current BJP government had expunged the records of ‘De La Rue’ being banned in the past to award a secretive tender to the KBA GIORI company for printing India’s currency notes. The tender was secretive as the agreement was neither discussed in the parliament not disclosed to public.*

*In November 2015, the De La Rue company once again dominated its operations in India via the project centered around UK & INDIA’s DEFENSE & INTERNATIONAL SECURITY PARTNEERSHIP AGREEMENT.*

*Since then, the stock of De La Rue surged by 33.33% in a short sprint of 6 months. In short, Modi and the BJP government had aided De La Rue to reestablish its currency printing empire across the international market.*

Shiv Sena MP Hemant Godse has publicly stated that Modi had involved in the favorable allotment of 10 acres of land in Aurangabad for a new company, ‘Security Papers Mills’ to print government bonds.

In April 2016, when the infamous “Panama Papers” emerged implicating all tax dodgers across the world, the *De La Rue Company’s name came up in an allegation for having bribed an agency in Delhi with 15% commission to strike a contract with the Reserve Bank of India. Similarly, the Reserve Bank of India was implicated for having paid 40 million pounds for the contract*. Unexpectedly, Modi government banned the De La Rue company in April 2016.

India’s NSA Ajit Doval should be the brain and heart of this conspiracy as he was the key redeemer of De La Rue company by safeguarding Robert Giori from the terrorists back then in 1999.

Post demonetisation, Ajith Doval’s son Vivek Doval and Shaurya Doval, stashed massive amounts of black money in Cayman Islands under the guise of a shell company, GNY ASIA and later used it to bring back thousands of crores of rupees into India under the guise of foreign investments. Panama Papers had accused another director of the GNY ASIA company, Don W EBanks, for stashing black money across several tax havens. Vivek Doval’s brother, Shaurya Doval runs a company, Gemini Financial Services company, of which, one of its two directors is the Pakistani Syed Ali Abbas and the other one is the son of Saudi King, Mishaal Bin Abdullah Bin Turki Bin Abdulaziz Al-Saud, who finances the ISIS terrorist group.

Six months before the announcement of the note ban and introduction of 2000 rupee note by the Modi government on November 08, 2016, about 26 officials across various departments in the Indian Union headed by Amit Shah had sought the help of De La Rue to print the 2000 rupees. After announcing demonetisation, they had approached top capitalists in India to supply them with the new 2000 rupee notes (that were printed outside of India before 6 months) as a mean to launder their black money. They had charged around 15% to 45% commission for the laundering their black money.

*In short, we are talking about a massive scandal of ‘3 lakh crores’ at a minimum.*

All of this was confessed by one of the senior RAW agents, Rahul Ratnakar (see image) who was one of the key partners in facilitating this scandal.

In this scandal, various departments of the Indian Union have been used illegally. All of the money that was printed overseas had been flown to India with the help of Indian military to the military airbase, Hinden from where the printed money was then circulated to the top capitalists who were keen to launder their black money.

The ultimate fraud that is concerned with this scandal is that the governors name on the 2000 rupee notes that were printed overseas during April 2016 (6 months before the note ban) had Ujjit Patel’s signature on it as the Indian RBI Governor whereas Raghuram Rajan was the actual Indian RBI governor during that point of time.

This implies that Modi and the BJP government had planned and executed this scandal by printing notes with Urjit Patel’s signature well beforehand during April 2016 and then appoint him as the governor only during September 2016, just a month before the note ban was announced so that it looks as if the new governor, Urjit Patel had signed the 2000 rupee notes and not raising any suspicion about the notes being printed overseas well before 6 months. Also, the screen fell in the drama with the new governor, Urjit Patel supporting the BJP government’s currency ban decision.

*For a moment, just think of the acuteness and the scale of the scandal that BJP government had committed under Modi by making fool of the 1.3 billion Indian citizens and unlawfully using government’s various departments. This is not just about the massive 3 lakh crores the BJP government had swindled but about the innocent lives and livelihoods of the 1.3 billion Indians that were lost as a result of the nation’s worst ever economic disaster called, ‘Demonetisation’. 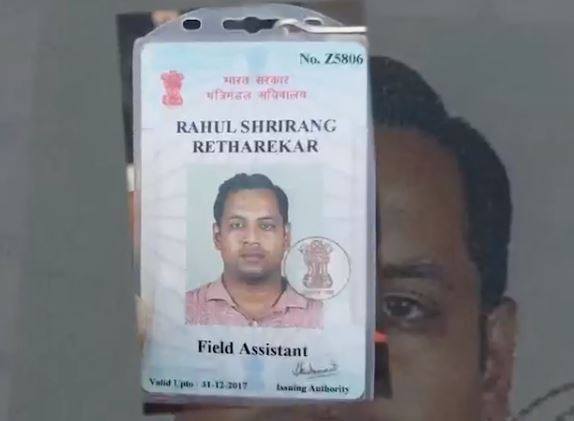