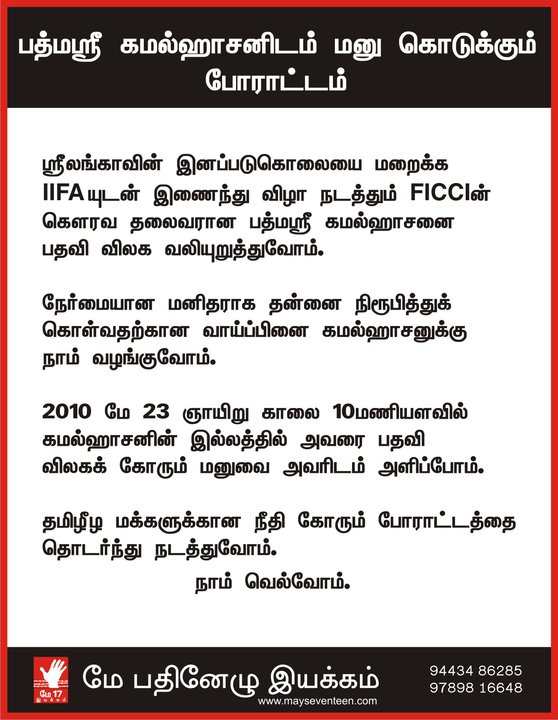 Why we should Oppose KAMAL HASAN

Its important to understand Kamal Hasan’s role in having IIFA Bollywood award to a genocide country.
Kamal Hasan is the Chairman Media & Entertainment Conclave of FICCI. And this FICCI’s Media and Entertainment chapter has a greater role in choosing Srilanka as their destination to promote their businesses. And that’s why the IIFA has changed its mind from going to Seoul to Colombo . And this proposal would have not happened without the knowledge of Mr.KAMAL HASAN, who wrote a poem to condemn the London Bombing, and not uttered a word condemning Srilankan tamil genocide who happened to be a “HUMANIST” throughout his film. His post as Chairman is extended every  year and this comes to end this June 2010, unless otherwise he wanted to continue. So he will say ” I have no Role in IIFA awards Colombo”.
http://www.ficci-frames.com/frames2010/entertainment_comm.html
http://www.ficci-frames.com/chennai_conclave/speakersprofiles.pdf
http://www.ficci-frames.com/frames2010/other_events.html
The award function of Bollywood was organized along with IIFA has the second day program filed with Global Business Forum. The forum is aimed at investment opportunities at Srilanka which is crippling by war and the withdrawal of GSP+ tax concession made by European Union. International pressure from various sources has already cornered the Srilanka to investigate the crimes.
This FICCI Global trade meet will help srilanka to escape from the international pressures and so is our protest to this Unethical business practice of FICCI Organisation. And we requesting Mr.Kamal Hasan to resign from the FICCI’s Entertainment and media division’s chairman to protest the FICCI for supporting Mahinda Rajapaksa of Srilanka